In vivo electrophysiology measures neuronal activity in the brain as either local field potentials or single units.  Brain regions are targeted precisely, and the effect of test compounds can be assessed following either systemic delivery or by direct application using iontophoresis.  In vivo electrophysiology is a powerful tool to reveal abnormalities in brain circuitries, and to assess whether drug candidates can restore normal neuronal function.  Finally, in vivo electrophysiology combined with simultaneous blood sampling can be used to correlate the real-time effects of drug candidates on neuronal activity with the plasma concentration of the drug.

Studying the function and connectivity of neurons in vivo can reveal firing alterations in genetically modified animals and assess the efficacy of drug candidates on these alterations.

Simultaneous stimulation and recording can also reveal inhibition or activation of a pathway by a candidate drug and help explain its therapeutic effect. 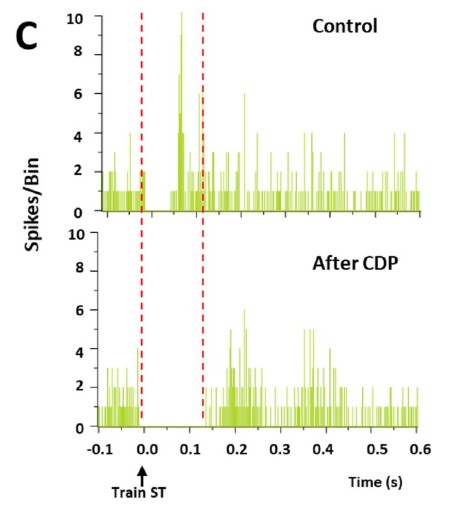 Figure 3:  NMDA-induced activation of a single neuron in rat prefrontal cortex is blocked by MK-801.  (A)  Local iontophoretic administration of NMDA (black boxes) increases the firing frequency of the neuron (NMDA is administered every 40 seconds for 10 seconds).  (B) MK-801 (NMDA antagonist; 2 mg/kg) administered intravenously blocks the NMDA induced activity.  Y axis shows the number of spikes per 2s bin.

Relationship between the drug effect (PD) to drug concentration (PK) can be established to predict clinical response in humans when in vivo recording is combined with blood collection at multiple time points.

Find out more or adjust your settings.