Huntington’s disease (HD) is an incurable neurodegenerative disease characterized by abnormal motor movements, personality changes and early death.   The disease typically starts in midlife and symptoms progress over the course of 15–20 years until death.  The mutation responsible for HD is an unstable expansion of CAG repeats in the gene encoding for the huntingtin (Htt) protein, giving rise to an abnormal number of glutamine repeats, which accumulate and form aggregates in the nucleus.  These aggregates, called inclusion bodies (IBs), are the pathological hallmark of HD.

In collaboration with the CHDI Foundation, we employed molecular, behavioral, histological, and electrophysiological approaches to characterize the R6/2 HD mouse model, expressing the N-terminal (exon 1) portion of huntingtin with an expansion of approximately 120 CAG repeats, at both pre- and post-symptomatic ages.  We have recapitulated some aspect of HD in humans including neuronal loss, Htt aggregation and inclusion bodies, motor decline and cognition impairment, deficits in synaptic transmission and plasticity, changes in expression of disease markers, and altered kynurenine pathway.  120 CAG R6/2 model is therefore a validated and predictive animal model for preclinical efficacy studies.

Increased levels of aggregated Htt can be detected by mEM48 antibody at symptomatic ages in 120 CAG R6/2 mice. Aggregation of mutant huntingtin is accompanied by a decrease in the percentage of striatal DARPP-32-positive medium spiny neurons and a significant atrophy of both the dorsal striatum and the entire cerebral cortex.

Figure 1:  Huntingtin aggregation in striatal tissue from 120 CAG R6/2, at ages ranging from 2 to 16 weeks.  Htt aggregation in R6/2 occurs in an age-dependent manner. 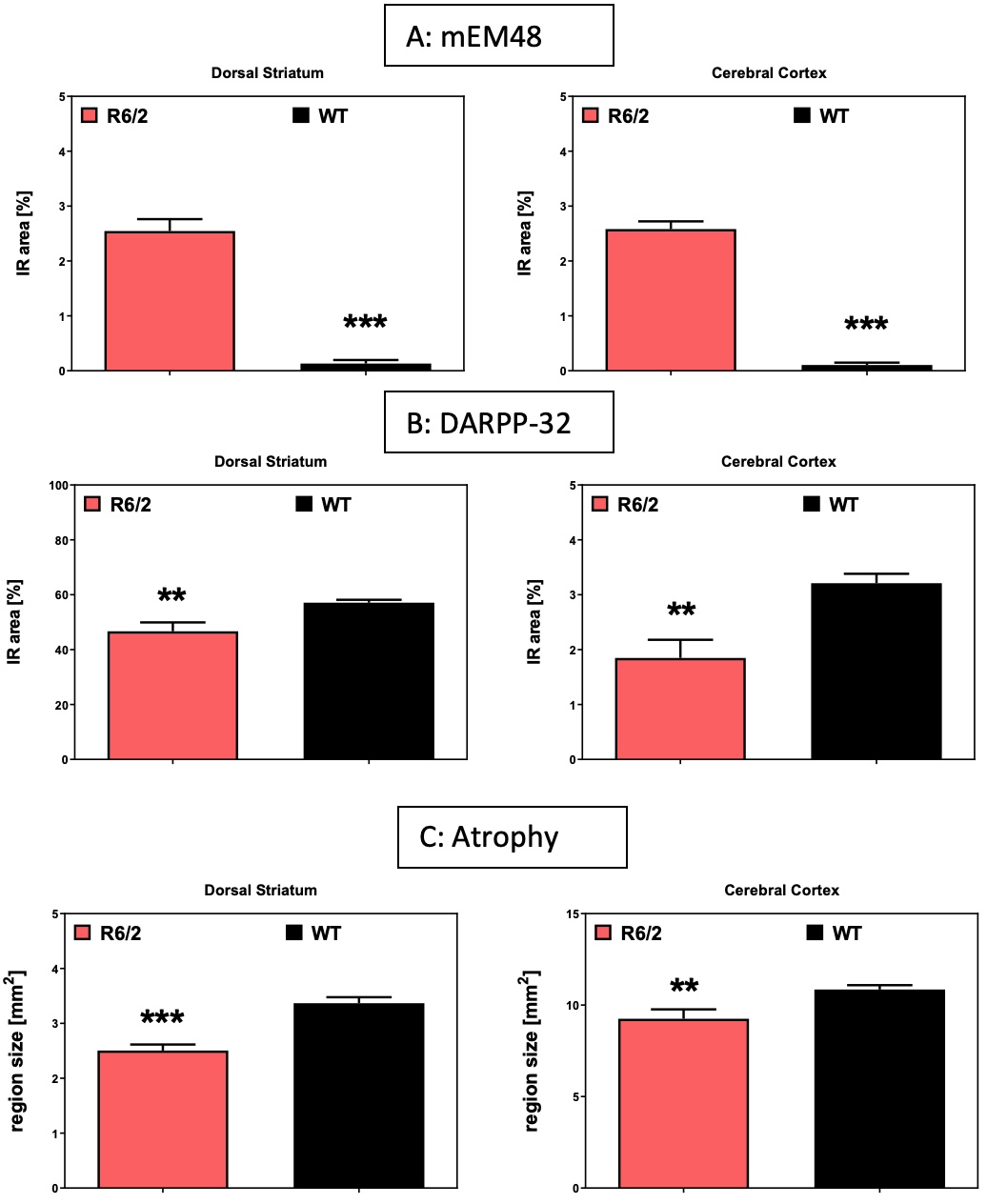 Figure 3A-C: Histological quantification of (A) mEM48, (B) DARPP-32 and (C) atrophy in the dorsal striatum (Left) and the cerebral cortex (Right) of R6/2 versus WT. 120 CAG R6/2 mice at the age of 12 weeks show a strong increase of mEM48 positive aggregates, a loss of MSN as judged by reduction of DARPP-32 labeling. They also demonstrate a severe atrophy of the dorsal striatum and cerebral cortex.

120 CAG R6/2 mice, show a progressive decline in motor function (around 6 weeks of age), loss of body weight (around 10 weeks of age), and premature death.

Figure 8: Latency to fall collected from 3 consecutive trials at 4, 6, 8 and 12 weeks of age. 120 CAG R6/2 mice demonstrated a loss of motor coordination as early as 6 weeks of age, with a faster latency to fall when compared to their WT littermates.

Figure 11:  Striatal MSNs from 8 to 12-week-old R6/2 120 CAG mice exhibit elevated input resistance (Rm, A) and reduced frequency of spontaneous excitatory post-synaptic currents (mEPSCs, B).  The amplitude of mEPSCs was unaffected (not shown). These readouts are consistent with both intrinsic hyper-excitability and the loss of excitatory synapses.  Animal numbers are indicated in parentheses.

Comparison of striatal levels of kynurenine metabolites in 12 to 13-week-old 120 CAG R6/2 to wild type mice demonstrate a significant increase in the neurotoxic metabolite 3-hydroxykynurenine levels in R6/2 mice.  This neurotoxin is believed to play a causative role in HD.  Such changes in kynurenine metabolism are associated with neuroinflammation and have been demonstrated to be involved in other CNS-related disorders such as Parkinson’s, Alzheimer’s, depression, schizophrenia and ALS.  In particular, increased levels of quinolinic acid has been associated with suicidality in humans.  Thus, measuring changes in kynurenine metabolites not only provides surrogate biomarkers of disease progression, but can also be used in efficacy studies and PK/PD readouts.

Figure 12:  LC/MS/MS was used to measure Kynurenine and related analytes in striatal tissue of the 120 CAG R6/2 vs. wild type mice.  Neuroactive metabolites of the kynurenine pathway have been implicated in the pathophysiology of neurodegenerative disorders, including HD.  Significant changes were observed in these important neurochemicals in the 12 to 13-week-old 120 CAG R6/2 mice.

To obtain a complete review of 120 CAG R6/2 phenotyping and other models of Huntington’s disease, please consult our additional resources: