Huntington’s disease (HD) is an autosomal-dominant inherited neurodegenerative disorder that results from an abnormal trinucleotide CAG repeat expansion in the huntingtin (htt) gene. The zQ175 knock-in model of HD, generated with the replacement of mouse Htt exon 1 with the mutant human HTT exon 1, was identified at PsychoGenics. It was obtained by spontaneous CAG expansion in Q140 knock-in mice generated in the laboratory of Dr. Scott Zeitlin. This newer model has ~188 CAG repeats and displays a slow progression of HD-relevant abnormalities such as decreased striatal volume, motor impairment, and basal ganglia circuit abnormalities.

In collaboration with the CHDI Foundation, we employed behavioral, molecular, and electrophysiological analyses to assess striatal dysfunction in the heterozygous and homozygote zQ175 mice. The zQ175 (neo+) knock-in and zQ175DN (delta neo) models of HD can be tracked through CHDI Foundation as CHDI-81003003 and CHDI-81003019, respectively. 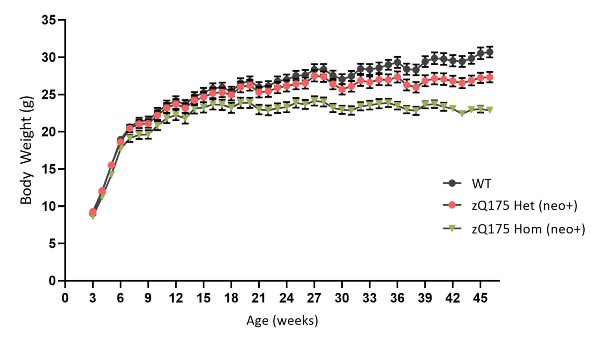 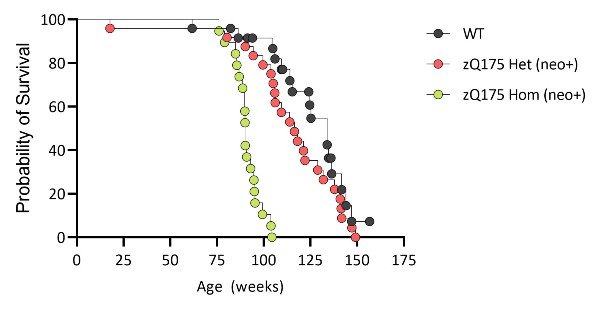 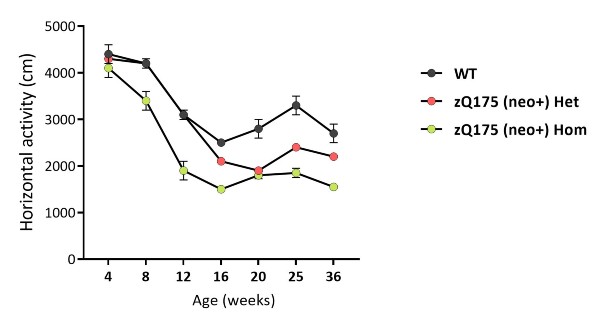 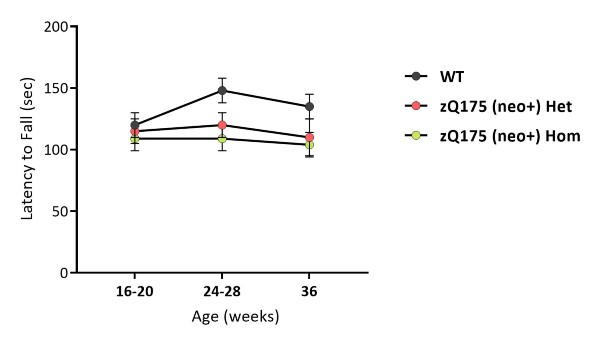 Figure 4: Rotarod assessment. Starting around 24 weeks of age, both zQ175 (neo+) Homozygous and Heterozygous mice fall faster from the rod compared to their WT littermates, revealing a motor coordination deficit.

Apathy, defined as lack of motivation characterized by diminished goal-oriented behavior, is a known symptom of Huntington’s disease and other neurodegenerative disorders. A typical and well-controlled assay to probe this domain in rodents is the progressive ratio task, a procedure where food-restricted animals are required to expend progressively increasing effort to obtain successive food reinforcements.

Figure 8. In vivo single unit recording from anesthetized 6-8 month old zQ175 (neo+) knock-in mice (labeled as Q175). A) Decreased action potential number and B) spike probability was observed in the zQ175 Het mice across a range of stimulating intensities (p <0.01 for panel A; p<0.001 for panel B). (Figures adapted from Beaumont, V. et al (2016) Neuron.)