Neurofibrillary tangles and amyloid plaques are widely thought to play a major role in development of Alzheimer’s disease (AD) pathology.  The rTg4510 mouse is a mouse model of tauopathy overexpressing P301L mutant human Tau in the forebrain using combination of the tetracycline-controlled transactivator (tTA) system with the CaMKII alpha promoter. This line of rTg4510 mice exhibits an age-dependent and region-specific progression of neuropathology associated with cognitive impairment that can be reversed by suppression of transgene expression following chronic treatment with Doxycycline.

Figure 1:  Cognitive deficits in rTg4510 mice.  Female rTg4510 mice (4 months old) show deficits in acquisition of the Morris Water Maze task (A) and spend less time in the correct quadrant during the probe test compared to either Wild type (WT) or tTA control (expressing a tetracycline-controlled transactivator (tTA) under control of the CaMKIIα promoter) mice (B).  6-month-old Female rTg4510 mice show deficits in acquisition of T-maze task (C) and reversal sessions (D).  2 months of Doxycycline treatment (from 4 to 6 months of age) attenuated the deficits seen during acquisition and reversal sessions (C&D).

Our electrophysiological assays offer robust tools for evaluation of therapeutics designed to improve synaptic transmission and plasticity.  Our assessments include evaluation of long-term plasticity (Figure 4) and basal synaptic transmission (Figure 5), in the CA1 region of hippocampus.  The onset of age-associated memory deficits shown in Figure 1, correlate well with impairments in long-term plasticity in this model (Figure 4).

Figure 4:  CA3-CA1 long –term potentiation (LTP) is impaired in rTg4510 mice.  (A) Time-course of LTP experiment.  LTP was induced with a high frequency stimulation protocol (HFS 3x 1 second duration 100 Hz tetanus trains with 5 min between trains).  The level of LTP and post-tetanic potentiation induced in slices from 6 to 7 months old rTg4510 mice were significantly lower compared to WT.  24 to 28 weeks of Dox treatment (starting at 6 weeks of age) resulted in complete restoration of LTP.  Data are presented as mean ± SEM.  (B) Summary of the last five minutes of data from (A).

In addition, we identified an impairment in axonal conduction velocities (VC) in Schaffer-collaterals of rTg4510 mice.  This assay provides a functional surrogate of white matter abnormalities observed in AD patients.  Pre- and post-synaptic deficits observed as fiber volley and fEPSP slope reduction (Figure 5), together with reduced conduction velocity (Figure 6) correlate with neurodegeneration observed in this mouse model.

Conduction velocity of Schaffer collaterals in CA1 area of hippocampus: 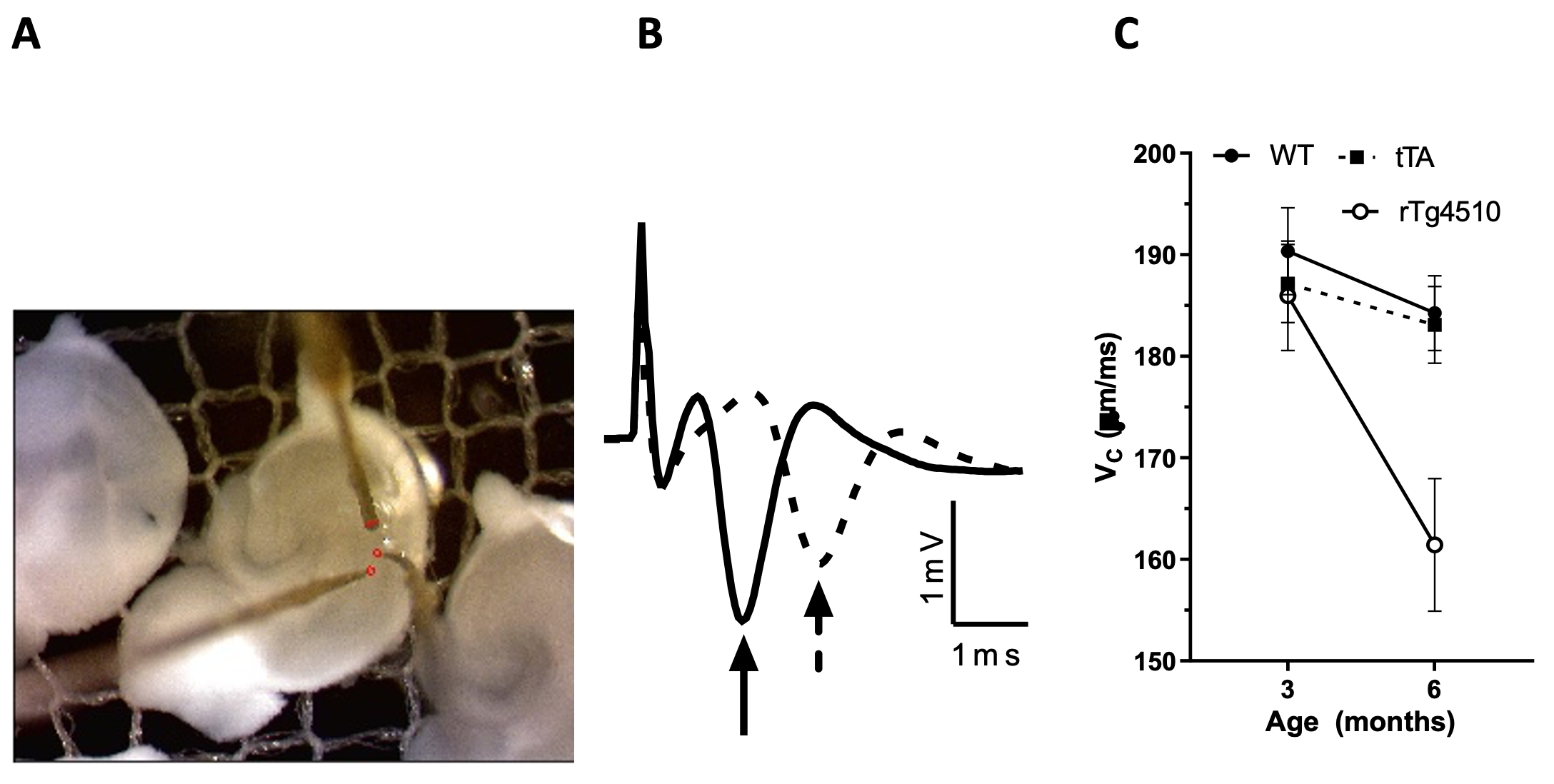 Figure 6:  Conduction velocity deficits in CA1 area of hippocampus. (A) An image of a hippocampal slice showing placement of stimulating and recording electrodes in the stratum radiatum layer of CA1. Electrodes coming from the bottom of the image are recording electrodes. (B) Representative recordings of compound action potentials (CAPs) from electrode 1 (full trace) and 2 (broken trace), located closer and further from the stimulating electrode, respectively. Arrows indicate the most negative points in CAPs that were used to determine the time difference in propagation. (C) Only 6-month-old, and not 3-month-old, rTg4510 mice showed a reduction in conduction velocity compared to age-matched controls. Symbols and error bars represent mean and 95% confidence intervals, respectively (Gelman et. al. [2020 accepted].

rTg4510 mice demonstrate a strong and progressive Tau pathology and neuroinflammation, recapitulating some important features of AD such as hyperphosphorylation of Tau at several relevant phosphorylation sites, progressive development of neurofibrillary tangles (NFTs), and severe brain atrophy.  Synaptophysin and NeuN antibodies are used to detect morphological changes such as loss of synapses and neurons.  Antibodies such as pThr231, pSer202, pThr181 and dyes like Thioflavin S are used to evaluate tauopathy.  Activation of microglia and astroglia are assessed by anti-Iba1 and -GFAP antibodies.

Figure 8:  Thioflavin S positive neurofibrillary tangle (NFT) Assessment.  NFT load in somatomotor areas of the frontal cortex is elevated in 6-month-old rTg4510 and is rescued in rTg4510 mice treated with Dox from 6 weeks of age.